People go to cemeteries to be with the souls of the departed and build private altars containing the favorite foods and beverages, as well as photos and memorabilia, of the departed. The intent is to encourage visits by the souls, so the souls will hear the prayers and the comments of the living directed to them. Celebrations can take a humorous tone, as celebrants remember funny events and anecdotes about the departed. 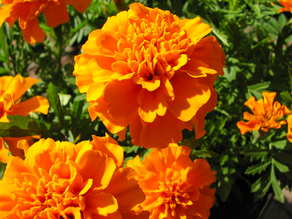 Plans for the day are made throughout the year, including gathering the goods to be offered to the dead. During the three-day period, families usually clean and decorate graves; most visit the cemeteries where their loved ones are buried and decorate their graves with ofrendas (offerings), which often include orange Mexican marigolds called cempasúchil. In modern Mexico, this name is sometimes replaced with the term Flor de Muerto (Flower of Dead). These flowers are thought to attract souls of the dead to the offerings. 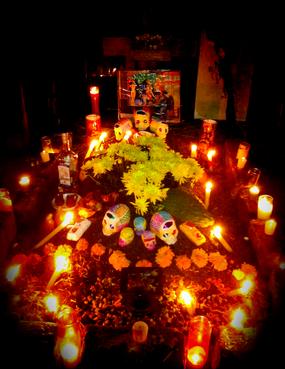 Toys are brought for deceased children (los angelitos, or "the little angels"), and bottles of tequila, mezcal or pulque or jars of atole for adults. Families will also offer trinkets or the deceased's favorite candies on the grave. Ofrendas are also put in homes, usually with foods such as candied pumpkin, pan de muerto ("bread of the dead"), and sugar skulls and beverages such as atole. The ofrendas are left out in the homes as a welcoming gesture for the deceased. Some people believe the spirits of the dead eat the "spiritual essence" of the ofrendas food, so though the celebrators eat the food after the festivities, they believe it lacks nutritional value. Pillows and blankets are left out so the deceased can rest after their long journey. In some parts of Mexico, such as the towns of Mixquic, Pátzcuaro and Janitzio, people spend all night beside the graves of their relatives. In many places, people have picnics at the grave site, as well.

Some families build altars or small shrines in their homes; these usually have the Christian cross, statues or pictures of the Blessed Virgin Mary, pictures of deceased relatives and other persons, scores of candles and an ofrenda. Traditionally, families spend some time around the altar, praying and telling anecdotes about the deceased. In some locations, celebrants wear shells on their clothing, so when they dance, the noise will wake up the dead; some will also dress up as the deceased.

Public schools at all levels build altars with ofrendas, usually omitting the religious symbols. Government offices usually have at least a small altar, as this holiday is seen as important to the Mexican heritage.

Those with a distinctive talent for writing sometimes create short poems, called calaveras (skulls), mocking epitaphs of friends, describing interesting habits and attitudes or funny anecdotes. This custom originated in the 18th or 19th century, after a newspaper published a poem narrating a dream of a cemetery in the future, "and all of us were dead," proceeding to read the tombstones. Newspapers dedicate calaveras to public figures, with cartoons of skeletons in the style of the famous calaveras of José Guadalupe Posada, a Mexican illustrator. 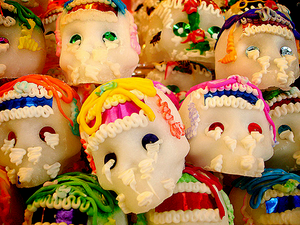 A common symbol of the holiday is the skull (in Spanish calavera), which celebrants represent in masks, called calacas (colloquial term for skeleton), and foods such as sugar or chocolate skulls, which are inscribed with the name of the recipient on the forehead. Sugar skulls as gifts can be given to both the living and the dead. Other holiday foods include pan de muerto, a sweet egg bread made in various shapes from plain rounds to skulls and rabbits, often decorated with white frosting to look like twisted bones.

José Guadalupe Posada created a famous print of a figure he called La Calavera Catrina ("The Elegant Skull") as a parody of a Mexican upper-class female. Posada's striking image of a costumed female with a skeleton face has become associated with the Day of the Dead, and Catrina figures often are a prominent part of modern Day of the Dead observances.

The traditions and activities that take place in celebration of the Day of the Dead are not universal, often varying from town to town. For example, in the town of Pátzcuaro on the Lago de Pátzcuaro in Michoacán, the tradition is very different if the deceased is a child rather than an adult. On November 1 of the year after a child's death, the godparents set a table in the parents' home with sweets, fruits, pan de muerto, a cross, a rosary (used to ask the Virgin Mary to pray for them) and candles. This is meant to celebrate the child's life, in respect and appreciation for the parents. There is also dancing with colorful costumes, often with skull-shaped masks and devil masks in the plaza or garden of the town. At midnight on November 2, the people light candles and ride winged boats called mariposas (butterflies) to Janitzio, an island in the middle of the lake where there is a cemetery, to honor and celebrate the lives of the dead there.

In contrast, the town of Ocotepec, north of Cuernavaca in the State of Morelos, opens its doors to visitors in exchange for veladoras (small wax candles) to show respect for the recently deceased. In return, the visitors receive tamales and atole. This is only done by the owners of the house where someone in the household has died in the previous year. Many people of the surrounding areas arrive early to eat and enjoy the elaborate altars set up to receive the visitors from Mictlán.

In some parts of the country (especially the cities, where in recent years other customs have been displaced), children in costumes roam the streets, knocking on people's doors for a calaverita, a small gift of candies or money; they also ask passersby. This relatively recent custom is similar to that of Halloween's trick-or-treating.

Some people believe possessing Day of the Dead items can bring good luck. Many people get tattoos or have dolls of the dead to carry with them. They also clean their houses and prepare the favorite dishes of their deceased loved ones to place upon their altar or ofrenda.
OUR WINES
Source: Wikipedia - http://en.wikipedia.org/wiki/Day_of_the_Dead
Under creative commons license http://creativecommons.org/licenses/by-sa/3.0/
La Calavera Catrina, by José Guadalupe Posada - Public Domain in the United States, published prior to 1923.